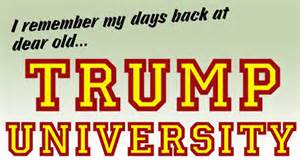 The general elections have started early this year and the Clinton’s have fired their one and only bullet at Trump. The Trump university cases. In my opinion this is the only real vulnerability of Trump in this campaign and if we are being objective it is a small one.

Everyone should know about it by now given the amount of time the media has spent covering it but for those who don’t, Trump University was a company started by Mr. Trump to teach people how to make money of the real estate market. Of course it is well-known that real estate is one of the fields Mr. Trump specializes in and has made the most money of. Over time some students have complained that they did not get the proper education in real estate and did not make any money of it. Some former mentors or teachers characterized as “disgruntled employees” say that high pressure sales tactics were used.

What are the actual numbers? According to an article by cbs news( found here ) there were 80000 people who attended the free seminar to introduce people to Trump University. Let me just reiterate that. 80000 people came in for free at no cost to them and were given some tips about how to make money of the real estate market as well as given an offer for additional programs. Out of those 80000 people 6698 signed contracts for additional classes. Of those students 2539 got refunds. According to this article ( found here ) freedom of information act request was given to the Federal trade commission and they claim that there were 35 complaints filed. These range from a woman not receiving a free I-pad prize as well as a man saying that they did not get value out of the full 35000$ package that Trump university offers. According to the New York secretary-general over 5000 people did not get the education they paid for in Trump University. I will let the numbers speak for themselves. Only 6698 people ever signed up for it. Only 2539 requested for a refund. Only 35 people filed a complaint in the FTC. There are currently 3 lawsuits. One by the secretary general of New York and two more by former students. One of the lawsuits by a former student has been dropped.

We have to be honest with ourselves and realize that no educational institution offers a 100% success rate. Harvard, Yale, and Princeton all ivy league schools will never make a claim that all of their students will be successful in life. They will say that they provide the tools and the background to be successful. Exactly like Trump University. This article here ( found here ) which is very favorable to Harvard says that while plenty of Harvard alumni will make high salaries a full 10% do not know whether or not they will be employed the following year. In the case of Trump University we have a case where around 33% of people asked for refunds and less than 1% filed a complaint in the FTC. Is the 66% of people who were satisfied with the course much lower than the 90% of Harvard graduates who will be employed? Yes. Trump University has a lower success rate than an ivy league school. Yet Trump University is only a seminar and offers you your money back as opposed to Harvard which will keep your money if you fail. The standards of success that everyone expects out of Trump University are obviously unreasonable.

The other complaint about Trump University is the high pressure sales tactics that were used to get you to sign up for additional classes. First of I would like to point out that more than 80000 people went to the free seminar. Less than 7000 were signed up for additional classes. If “high pressure sales tactics” were used then they failed, having only convinced less than 9% of the audience to purchase the product.

We have to admit also that high pressure tactics exist in society itself to convince you to go into college. From the media continually stating that your opinion is worth less as a member of “the poorly educated” to the tactics saying that you will be unemployable if you don’t take hundreds of thousands of dollars worth of debt to go into college. Whatever the Trump University sales experts did is no worse than what we encounter everyday. Let me state again for people to remember that less than 9% of people signed up for Trump University out of the 80000 audience due to “high pressure sales”

I see a lot of people comparing the Trump University case to the email scandal of the Clinton’s. These two things are nowhere near the same. It needs to be pointed out as well that the states pursuing the Trump U case are the two most liberal ones, the presiding judge may have ties to La Raza,  and the law firm representing the clients are Clinton donors while Obama’s own justice department is investigating Clinton.

In its worse case Trump University was is a civil case alleging  that it conned people into forking over 1500-35000 so that they could learn some things about how to take advantage of the real estate market. 6698 people were affected with around a third of them getting full refunds. Out of the entire country around 4000 people were affected.

In its worse case Hillary Clinton is being indicted for a criminal case for setting up an email server in her home guarded by technicians and lawyers she controls to avoid any accountability or Freedom of Information requests for her time as Secretary of State. This led to national security secrets being leaked to other countries and a mass deletion of any incriminating emails once the Freedom of Information request was given. This affects every single person in the country. The scale of the two issues cannot even be compared.