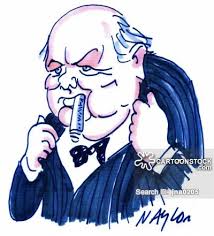 There has been a lot of comparisons done recently about the reaction of Britain to attacks during World War 2 and attacks by terrorists recently. During the Battle of Britain you had famous quotations from Winston Churchill promising defiance and eventual victory. My personal favorite is “Let the Hun do their worst and we shall do our best and with God’s help it will be enough”. Fast forward to today. We have the mayor of London openly saying that terrorist attacks are something that people living in big cities will have to get used to and leftist journalists saying there is nothing we can do. Various personalities on the right have declared that this shows the cowardice and defeatism of the left. They are wrong and this shows a fundamental misunderstanding on how the left thinks.

In the past few days I have talked about the concept of the original sin and this illustrates that perfectly. In the past both left and right agreed that Nazi Germany was wrong and Britain was right therefore the British people had the duty to resist German advances. The party that had to change for peace to be achieved was the Germans.

It is different with Islam and terrorism. The right has not changed. They believe that Islam has no right to do what its adherents are doing and they have a duty to resist. The entity that has to change for peace to be achieved is Islam. Liberals do not believe this. Listen to their solutions and the way they define the problem. According to liberals the problem is income inequality. The terrorists are not getting their share of the pie. The problem is climate change destroying their homes. The problem is the US and other European countries interfering in the Middle East. The problem is they are just not educated enough so we need to send more money. Islam does not have to do anything. The onus is on the west to step up and pay their ransom and the terrorist attacks will stop. In fact the proposed solution of Cenk from the Young Turks is a Marshall Plan for the Middle East. Essentially sending up to 10% of the GDP of the United States to build the Middle East.

The liberals are wrong here. It has been consistently proven that the Islamics that launch terrorist attacks on the west are among the most highly educated. The fact that they speak English passably shows this. In 9/11 and the Belgium attacks for example the attackers were all from well off families and were mostly university educated. In the case of terrorist attacks originating from Islamics in the west they were people who were already benefiting from government assistance and other form of hand outs.

As Ayn Rand once said it is not practical to support a protection racket. If the only reason you are paying someone is so they will not break your leg then they will just threaten you again in the future. We are right and the terrorists are wrong. If there is to be peace then it is on them to surrender and not us. We have nothing to be ashamed of with the success of the west. In the immortal words of Churchill ” You have enemies? Good. That means you have stood up for something sometime in your life”