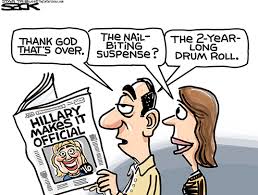 This will most likely be the most unpopular article I have ever written. Something I pride myself on though is being able to look at an event as objectively as I possibly can so that we can draw the proper lessons from it. Punditry has been unified in their opinion that Clinton ran a terrible campaign. I disagree. I think that Clinton maximized every single advantage she had. There were some things she could have done better but she was limited by other factors as well. The current groupthink only emerges because Clinton lost. If the reverse happened then they would all be saying Clinton ran a wonderful campaign and Trump a terrible one.

This brings us to the first point we have to address. If she ran such a good campaign then why did she lose? As a gamer (both computer and LCG/CCG) I know first hand that you can be a good player and have a good deck and still lose. In life there are times when you lose because the other player is just better. Clinton may have run a good campaign but Trump ran one of the best campaigns I have ever seen. Simple repeatable messages. Excellent branding of both himself and the opponent. Lastly marginalizing tactics his opponents could use against him. After all if you already know the mainstream media is biased against you then you call them fake news to turn people against them.

When you ask why Hillary Clinton was a failure the first answer people will give you is that her campaign had no message. What critics don’t understand is that this is a feature not a bug. Hillary Clinton ran as the establishment candidate to the radical change presented by Trump. The establishment candidate is not supposed to have a revolutionary message. They are supposed to say that things are going fine and that the other guy is crazy for proposing the changes that he wants done. Which is exactly what her message was.

Hillary Clinton being who she was could not run as anything but the establishment candidate. To do otherwise would be like getting a card pool filled with burn spells but making a control deck out of it or running a control character like a tank in Dota. It just would not work. One of the most important things in a candidate is knowing what you can do well and what you cannot do well.

First you had her history and connections all over the political world. People would scream fake if she was presented as the change candidate. Second she was running as the third term of Obama. If she were to be a change candidate then she would have to criticize policies enacted by Obama. Anything she said in that regard would just be used by Trump who was running against Obama just as much as he was against Clinton. More importantly the liberal media just made the case for the past 8 years that anyone who dared criticize Obama was a racist. Clinton would have difficulty doing this.

Being the establishment candidate Clinton had an easier time raising funds than Trump did. She milked this advantage for all it was worth. At the end of the process Team Clinton was able to raise 1.6 billion dollars for her election while Team Trump only raised something like 600-700 million. I cannot recall any other presidential election in recent memory where one candidate had a 2:1 advantage over the other in funding. It is true that one party will usually have the advantage over the other like with Obama outraising Romney, but never to this extent.

People have tried to say this did not matter as all the media coverage Trump got gave him something like 9 billion in free advertising. What they do not say is that of his coverage multiple studies show that over 90% was negative. If you want to consider negative advertising as money raised for the candidate then anytime someone runs an attack ad the money used for that should be considered spent by his opponent.

Clinton also maximized her political connections. Lawmakers, both Republican and Democrat, overwhelmingly wanted Clinton to win. This meant that major political figures did not attend the Republican National Convention or get involved in the Trump campaign. More importantly it also meant that they were able to threaten staff who used to help run Republican campaigns with being black listed for working with the campaign forcing Trump to rely on people who had gotten their experience in other countries like Manafort.

Beyond neutrality members of the Republican establishment even went over and above to help Clinton win. The Bush clan let it slip towards the end of the campaign that they would not be voting for Trump. The libertarian vice presidential candidate Weld went out and said he would only campaign in states that Trump was strong in like Georgia. Places which coincidentally the Clinton camp was trying to snipe. Most amazingly, the Republicans even ran a spoiler candidate in Mcmullin against their own guy.

Very few other candidates would have been able to achieve this much.

I am not saying that Clinton made no mistakes. I think that she could have treated her left wing supporters better as she was trying to attract the center voters for example. While she did make mistakes she maximized every advantage that she could in ways no other establishment candidate was able to in the past.

If we are to learn anything from the 2016 election we have to give credit where credit is due. That is true for both Clinton and Trump.