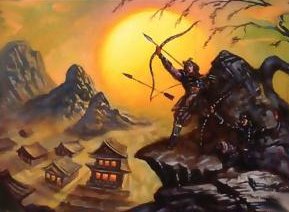 One of the most consistent questions I get from players that want to be competitive is what provinces to expect when they attack another clan. Which province you select can make or break the conflict so it is understandable why players want all the information they can get about this subject. Knowing which provinces your opponent is likely to have left will let you make informed decisions about whether to hit already revealed provinces or to explore new ones.

If you are ever forced to go in blind as a general rule you want to keep attacking provinces with no actions or with actions that cannot be used while reserving those with actions for times when you are sure to break them.

The three seeker clans generally have the strongest province lineup followed by Lion then the other Keepers. Scorpions will normally have Pilgrimage, Shameful Display, Secret Cache, and Meditations of the Tao for their provinces. The Stronghold will usually be Rally to the Cause or Entrenched Position.

For their line provinces the two that you would almost always go for is Pilgrimage and Meditations of the Tao. Shameful Display becomes a target of opportunity which you break if you can do it in such a way where it will not get to activate. At a certain point you would probably be given a choice between attacking Shameful and Cache. I personally would always choose Cache. Yes your opponent gets his best card out of 5 but it is still only one card. Shameful is like both a Way of the Scorpion and Way of the Crane rolled into one for that conflict.

Since there is always a possibility that the Stronghold is Rally to the Cause you would always have to send in a scout first before committing your entire force to a conflict that
may be switched.

Crane would normally run Manicured Garden, Fertile Fields, Shameful Display, and Meditations of the Tao for their line provinces. Some Cranes run a more anti-dragon deck with Forbidden Crossing. Their Stronghold is either Entrenched Position or Rally to the Cause.

Combined with the Seeker of Air reaction Crane can rack up a lot of fate really quickly. Crane players can use this to set up a big Conflict character or a good dynasty phase next turn. With Crane your primary targets are Meditations, Fertile Fields, and Manicured Garden. Shameful Display is your last opportunity and should only be hit as a target of opportunity.

Taken by themselves none of the provinces Crane use are all that dangerous. They just provide a lot of incremental advantage so you want to break them as fast as you possibly can. A scouting attack is also needed on their Stronghold as it could potentially be Rally to the Cause.

In my opinion Dragon is the deck to beat right now. I think they have the strongest province line up in the game. Dragon would normally use Restoration of Balance, Feast or Famine, Shameful Display, and Manicured Garden. Of those Manicured Garden is the softest target. Restoration of Balance can be played around as well. You just have to bid conservatively until you hit it. Think of it as trying to outlast the Dragon Deck. Feast or Famine is the most dangerous province in the game and would be a reason as to why you want to put only one fate on most of your characters. Manicured and Restoration are the two provinces you always want to break. If you have a choice go for Shameful Display as opposed to Feast or Famine. Be very cautious when exploring and make sure you can handle your best character being stripped of fate or have a plan to kill your opponents characters without fate.

For their Stronghold Dragon normally run Rally to the Cause. Dragon have very balanced stats so dont really mind which conflict they are in and it can buy an extra conflict which
maybe all they need to close the game out.

There was an adage that said “Lions don’t defend”. That was not strictly true before but it is becoming more and more true now. A Lion player would usually run with Manicured Gardens or Fertile Fields, Shameful Display, Art of War, and Feast or Famine. With Lion it is not so much which 3 provinces you want to break to get to the Stronghold but which province you do not want to break. Lion will only really bother defending Shameful Display and their Air province. Art of War gives the Lion player 3 free Conflict cards. That hurts but it is manageable which means you would want to break Art of War. Feast of Famine transfers all the fate from your best character into one of the many Lion weenies on the board. Unless you have Pathfinders Blade or some other way to mitigate Feast or Famine you would want to break the other 3. This is sometimes difficult as the Lion player would usually help you break Feast if needed.

For the Stronghold Lion would usually run Ancestral Lands. It is always tempting to attack Lion with a Military conflict for the last province. Just be aware that with Way of Lion and Legion of One a single Lion character can generate absurd amounts of stats. It may be better to just power thru using Political.

The first Unicorn province to watch for is Endless Plains. Until this province or another Water element one appears it is something you have to play around. Until this is revealed any attacks you send in must include someone that you are willing to sacrifice unless of course you are willing to risk getting blown out. Aside from Endless Plains the other provinces Unicorn would run are Manicured Garden, Shameful Display, and Meditations of the Tao. As usual you want to destroy the other two and leave Shameful as a target of opportunity.

For their Stronghold most Unicorns would run Ancestral Lands but there are a few who run Entrenched Position to take advantage of Captive Audience. With Cavalry Reserves it is also somewhat risky to attack a Unicorn Stronghold using Military.

Crab usually runs Defend the Wall, Manicured Garden, Shameful Display, and Meditations of the Tao. Due to their low glory some Crab players run Pilgrimage instead of Shameful. There really is no special thing to the Crab line provinces. The only thing to be careful about is Defend the Wall. The last thing you want to do is give them a tempo boost by allowing them to get a ring effect while defending. Any of the 4 provinces can be broken. It is just a matter of getting thru the Crab defense.

For their Stronghold most Crab players are using Riot in the Streets. They have multiple small bushi led by the Vanguard Warrior and Kaiu Envoy which let them bow the biggest threat just by defending. Other Crab players with a bigger line up prefer Rally to the Cause. Scouting is essential to trigger this.

As most Phoenix players know the clan was hit very hard by the move away from Seeker of Void. From having one of the most difficult to break Province line ups they now go to a very mediocre one. There has not been a settled meta yet for Phoenix as players are still struggling to cope with the loss so for this Clan I will discuss the provinces by role. Phoenix is still a Keeper clan after all and require a province for each element.

Manicured Garden and Meditations of the Tao usually fill out the Fire and Air slot. Phoenix needs all the fate it can get and Meditations is a good province in general. Both should be on your break list and something that you are used to seeing.

For their Water Province most Phoenix players have turned to Elemental Fury as opposed to Rally to the Cause. The exact rings being contested and claimed have become more and more important to Phoenix which is why they prefer this province now. After the initial conflict this province provides no further benefit and is another easy break.

Kuroi Mori is one of the most difficult provinces to get thru on the Stronghold. There are two real ways to get around it. First your weaker initial attack has to be good enough to trigger the ability so that your second attack can get through. Second is to run balanced characters like Dragon. It is worth nothing that the Kuroi Mori version has a very weak province line up until you hit the Stronghold which allow you to grab the advantage for the game.

I hope this article helps players make better decisions on which provinces they attack. If you have a drastically different set up please tell me about it in the comments.